What is the Hardest Painting Medium: Albert Bierstadt as One of the Best Oil Painters

Albert Bierstadt was one of the most well-known and significant American artists of the mid-nineteenth century. He gave many Easterners their first glimpse of the magnificence of the American West with his vast, intricate paintings of the Sierra Nevada and the Rocky Mountains. Bierstadt moved to New Bedford, Massachusetts, with his family when he was two.

As Bierstadt traveled across Europe with fellow colleagues and associates, Bierstadt developed a painting style during his apprenticeship at the renowned Royal Academy that was characterized by a focus on meticulous detail, exquisite environment, and stunning compositions that romanticized the landscape.

Albert, a member of the Hudson River School, started painting views from New York and New England upon his return home in 1857. Critics were struck by his technical skill in 1858 at the National Institute of Design in New York City when he exhibited his picture of Lake Lucerne from the Swiss Alps. He was given acclaim and was made an honorary member of the organization.

His Love for the West

The 19th-century art purchasers were captivated by the artist’s rough, idealized Western landscapes, which were painted on a big scale with a wealth of realism and dramatic lighting. Their fascination propelled Bierstadt to the pinnacle of the American contemporary art world. In his career, Bierstadt had enormous success and notoriety thanks to his paintings, which fetched record prices.

For his magnificent and sizable depictions of the American West, painter Bierstadt became well-known on a global scale, and his paintings entered both private and public collections for astronomically high prices for the period. His fame and fortune reached astounding heights before waning as the Boston School, and impressionism movements shifted people’s perceptions away from his meticulously rendered landscapes bathed in golden light. 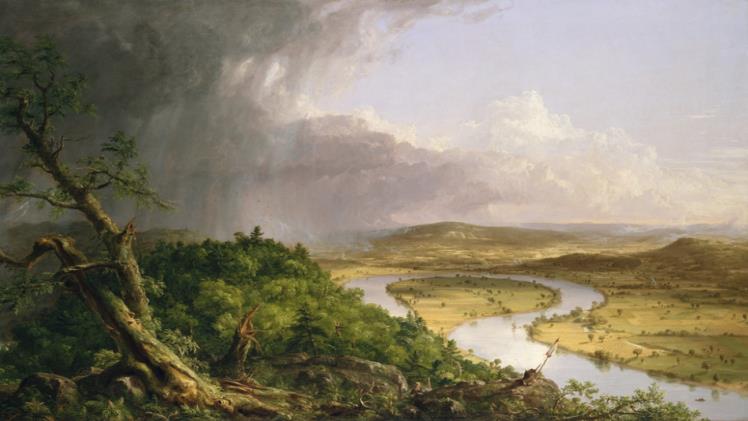 These painters specialized in highly detailed works frequently characterized by a romantic, shimmering light. The fact that the artists never referred to their aesthetic as luminism, a word developed considerably later by art historians in the 20th century is also noteworthy.

The accurate portrayal of shadow, light, and atmosphere in Luminist paintings conveyed a sense of calm and introspection. Instead of using brushstrokes, Albert Bierstadt paintings involved notches of vivid colors and tones to create an enveloping impression across the image. Albert Bierstadt’s artworks make him among the most well-known luminists of the period between 1850 and 1875, even attaining superstar status in his lifetime for his several ambitious paintings illustrating the American West.

The depth and majesty that Albert Bierstadt captured on canvas inspire contemporary landscape photographers who appreciate his great works. And even more than 150 years later, many photographers still use his luminist techniques to give their images a three-dimensional depth that attracts the viewer’s attention across the picture.

The Luminist Influence of Bierstadt

In order to inspire awe in the spectator of his paintings, Albert Bierstadt mastered the use of this method. To create depth, foregrounds were painted in darker hues with a lot of contrast and fine detail, utilizing things like different-sized rocks and trees.

In several of his landscapes, he illustrated lakes or ponds. He occasionally positioned things with sharp edges, such as humans or animals, against the water to make them stand out more. He also included reflections on neighboring landscape elements, such as trees or mountains.

Albert Bierstadt’s paintings featured great texture and realism because of the skillful representation of directed light utilizing vivid colors and deeper shadow elements. While his foregrounds and distant sky were frequently dazzling and full of intricate cloud patterns, mist, and atmosphere, brightness in certain spots projected sunlight on the earth.

Though it is known that Bierstadt occasionally used photographs to describe several of his scenes, it is interesting to remember that he primarily utilized sketches, study art pieces, as well as astute analysis of the interactions between shadow and light on the land to express the grandeur and realism in his work.

Albert Bierstadt explored various techniques and materials that were absent from his earlier, more conventional paintings in his later works.

Occasionally, his material selection negatively impacted the quality and appearance of these works. However, the most peculiar and exciting material was, by far, the ground layer of graphite paint. Bierstadt probably chose to explore using graphite as a coating material for canvas painting because it was suggested in modern ads for protecting and weatherproofing outside canvas covers.

He showed concern for preserving the painting canvas by using panel-back stretchers. Numerous Albert Bierstadt paintings have a textured surface, showing that the artist might have dabbled with other paint mediums, maybe even an oil and water combination. During this time, Bierstadt advised using copal varnish that had been dissolved in turpentine and poppy oil for surface coverings.

As we’ve seen, Albert Bierstadt became the most well-known landscape artist of his time because his body of work combined technical mastery with potent symbolism. In addition, his luminist aesthetic exalted the West’s promise, encouraging numerous people to travel throughout the western territories in search of better lives back home.

A few of Bierstadt’s surviving paintings are now highly valued historical relics. But, just like he offered hope and elegance to the individuals of his period, his impact can still be seen in the art being made today.

Norway Petrol Cards With a Discount